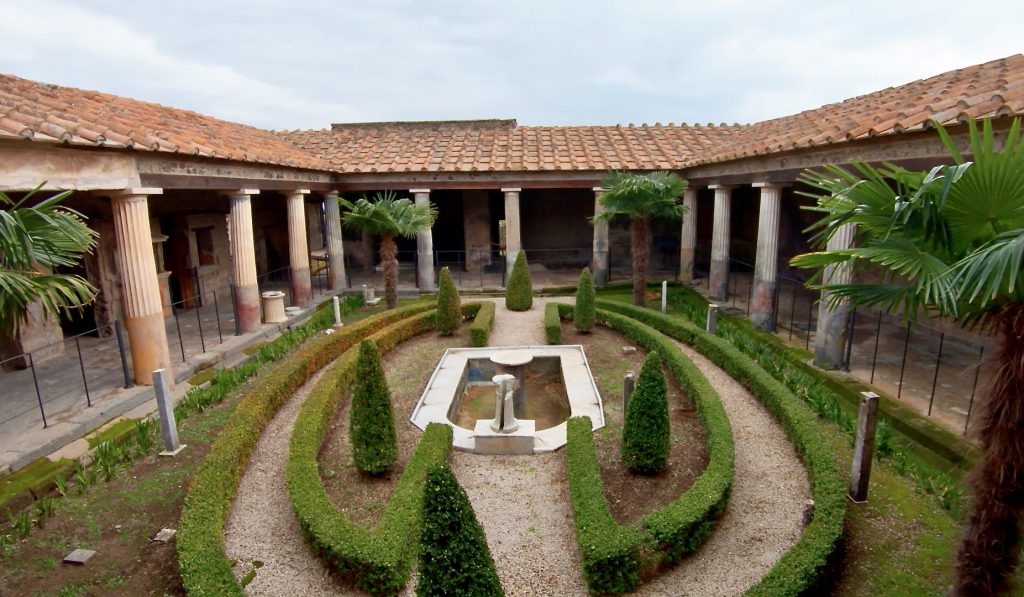 Meet our Licensed Guide nearby the main entrance of the archeological site by the Hotel Vittoria, skip the line to get the tickets and start to enjoy a guided tour of Pompeii through an unprecedented itinerary, among illusionistic gardens and trees in full vegetation.

Lemons, strawberry trees, luxuriant leaves and fluttering birds are characteristic of the garden painting widespread in ancient Pompeii. We usually find it in representative environments, where it has the advantage of expanding the space by opening the gaze to a green illusion. Anonymous artists in Pompeii imagined a lot of gardens: one in the sunlight, painted with such precision as to make the different plant species perfectly recognizable, the other immersed in the darkness of the night with three trees of different sizes. Among the luxuriant vegetation we then recognize motifs of Egyptian origin and references to Isis, the oriental goddess of the moon, recipient of the devotion of the inhabitants. Re-emerged between 1913 and 1951, the Casa del Frutteto has the typical atrium layout of Roman residences, with the rooms arranged around a central courtyard, and on the back a summer triclinium (dining room) surrounded by greenery. A fig tree stands out overwhelmingly on the scene with greedy half-open fruits, while a snake climbs sinuously between its branches. We are not in the earthly paradise waiting for Eve, but in Pompeii where the reptile is an omen of prosperity. The painting is part of the rich decoration of the House of the Fruit trees. The starting points will be the Domus dell’Efebo and di Trittolemo, whose green spaces have recently regained their ancient splendor thanks to in-depth research on ancient essences. And then the Domus dell’Ancora, with its unique garden, the recently reopened House of the Golden Cupids, the luxuriant complex of the Praedia di Giulia Felice, up to the House of Venus in the sea shell and that of Marco Lucretius, on the Via Stabiana.