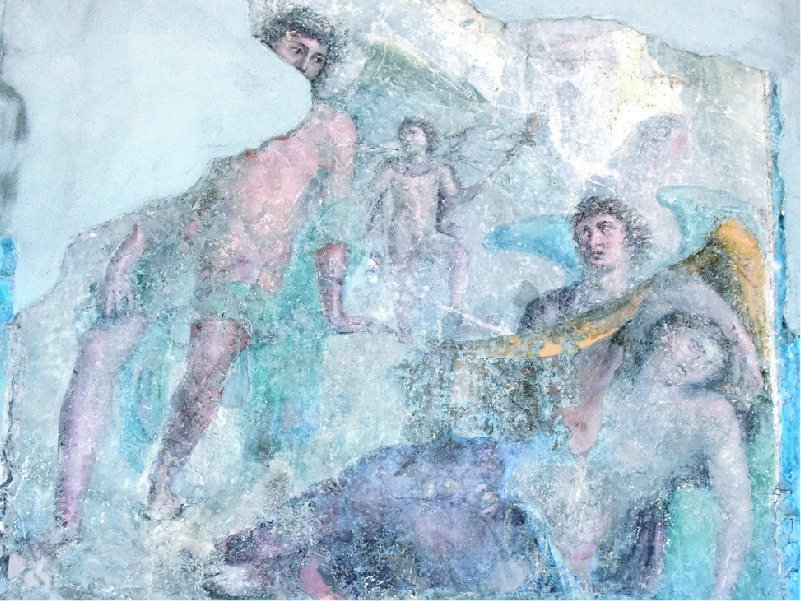 Meet our licensed guide nearby the main entrance of the archeological site of Stabiae Villa Arianna is a fine example of a dwelling within the Archaeological Excavations of Stabia, part of the great Archaeological Park of Pompeii.

Located on the south-west coast of the Gulf of Naples where, in Roman times, luxurious villas were built and they were desired by “celebrities” and aristocrats for their vacations.Villa Arianna is the most ancient villa of Stabia, it was built during the 2nd century. B.C. and occupies approx. 2500 square meters. It takes its name by a fresco representing Ariadne abandoned by Theseus found in the back wall of the triclinium.The frescoes representing vivid mythological scenes are as beautiful and important as those of Pompeii, however less known. You go through arcades with beautiful frescoes, you can get into the kitchens, the beautifully decorated rooms with staterooms and thermal areas. A place with a strong suggestive power, where the typical Pompeian red still rulers on the walls and columns , the refinement and meticulousness of the decorations accompany the silence of the hill, all framed by a breathtaking panoramic view. In fact the Romans could enjoy the view of the Gulf of Naples and the majesty of Vesuvius. On the 24th of September, 2020 in the historical setting of the Reggia di Quisisiana, took place the inauguration of the Archaeological Museum of Castellammare di Stabia (Museo Archeologico di Castellammare di Stabia) a new museum specifically for exhibiting the many important items found in the region of Stabia. There is a large number of finds on display, some never before exhibited in Italy, including frescoes, inlaid floors, stuccoes, sculptures, terracottas, tableware, objects made of iron and bronze, some already kept in the old Antiquarium of Stabia, closed to the public from 1997. The guided tour through the exhibits of the museum, a scientific project curated by the Parco Archeologico di Pompei, (the Archaeological Park of Pompei) is intended to provide an overall picture of Stabia and of the Ager Stabianus from the earliest times until the volcanic eruption in 79 CE.